By June the Beautiful Humpback whales have well and truly begun their 10,000 kilometre return journey and are pushing North to the warm sub-tropical waters of Queensland.

With the air temperature now much cooler than the ocean temperature, the mist from the plumes of these giants can easily be spotted and often hangs in the air at heights of up to 5 metres on calm days. These plumes can be spotted on the daily now especially from heights such as the Byron Bay lighthouse. The feeling you get when you hear this sound while sitting in a little kayak in the largest ocean in the world is up there with the best sound you will ever hear (for me it is anyway).  On a calm winters day with only the sound of the breeze, the waves and the birds, that huge exhalation of air from lungs the size of a Volkswagen Beetle is exhilarating. You will often hear the whales before you spot them 🙂

Often the young  males will lead the migration north and these are typically the first whales we will spot as they travel past Australia’s most Eastern Point.

This very recognisable male Humpback was spotted on the 12th of July this year and was very curious about our group of kayaks. 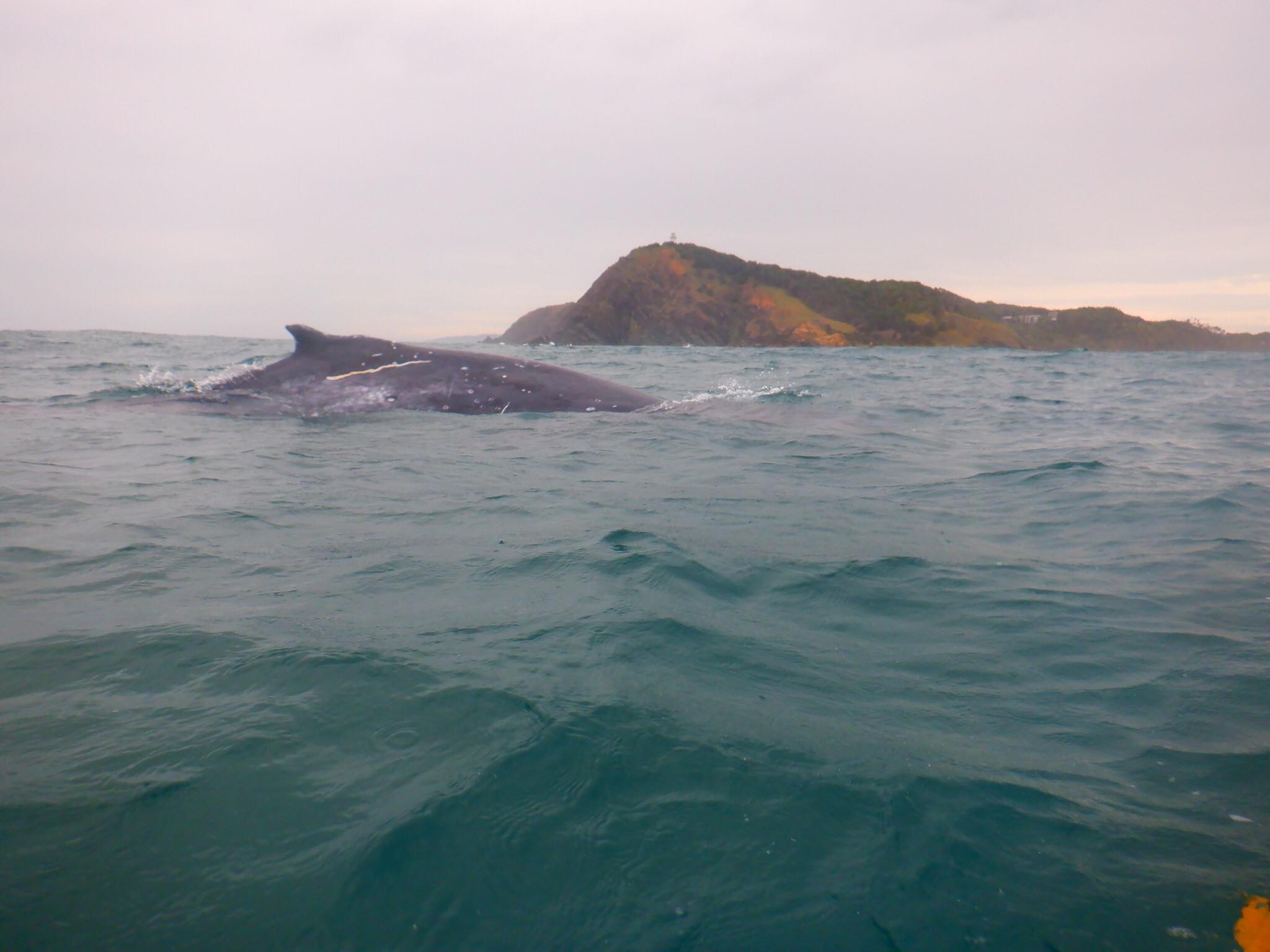 Following the the young males are usually the adult breeding whales and generally the pregnant cows and mother and calf pairs will bring up the rear.

Our winter tours feel like more of an adventure,  however the ocean is often calmer and more settled in the cooler months. Our afternoon tours are extra special as now the days are shorter meaning that during our paddles back to the beach we will get to take in the beautiful colours and the silhouettes of Wollumbin’ (aka Mt Warning) and Chincogan as the the sun sets behind the backdrop of the Border Ranges and the largest volcanic caldera in the Southern Hemisphere to the West of Byron Bay. 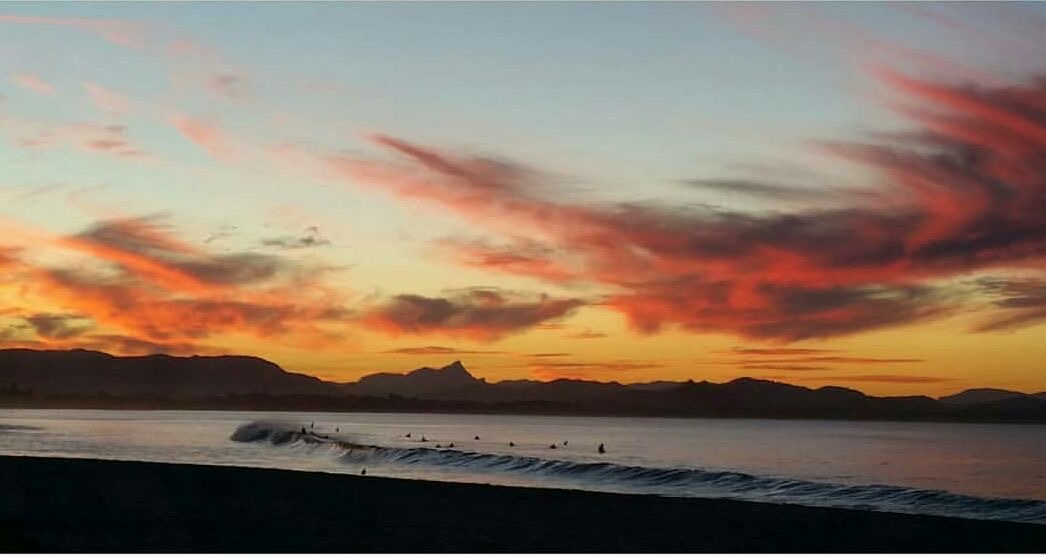 The sunsets in Byron Bay are pretty special. Beaches such as Little Wategos, Wategos and The Pass are Western facing. This means that you can sit on a beach on the East coast of Australia and watch the sunset over the ocean and the mountains as seen in the photo above.

The Australasian Gannets put on an amazing show in Winter! What are Gannets? Gannets are very large migratory sea birds closely related to the famous Blue Footed Booby and their feeding display is a spectacle to watch, especially from a kayak! Picture fireworks backwards. Gannets can dive from a height of 30 metres! They can hit the surface of the water at speeds of up to 100km per hour enabling them to catch fish at depths much deeper than most birds. The below image by Sean O’Shea shows three juvenile Australasian Gannets who, at one year old, already have a wingspan of 1.3 metres! The adults can easily be spotted as they have a yellow head and distinct black wing tips reaching a length of 1.8 metres from wing tip to wing tip.  We love Gannets! 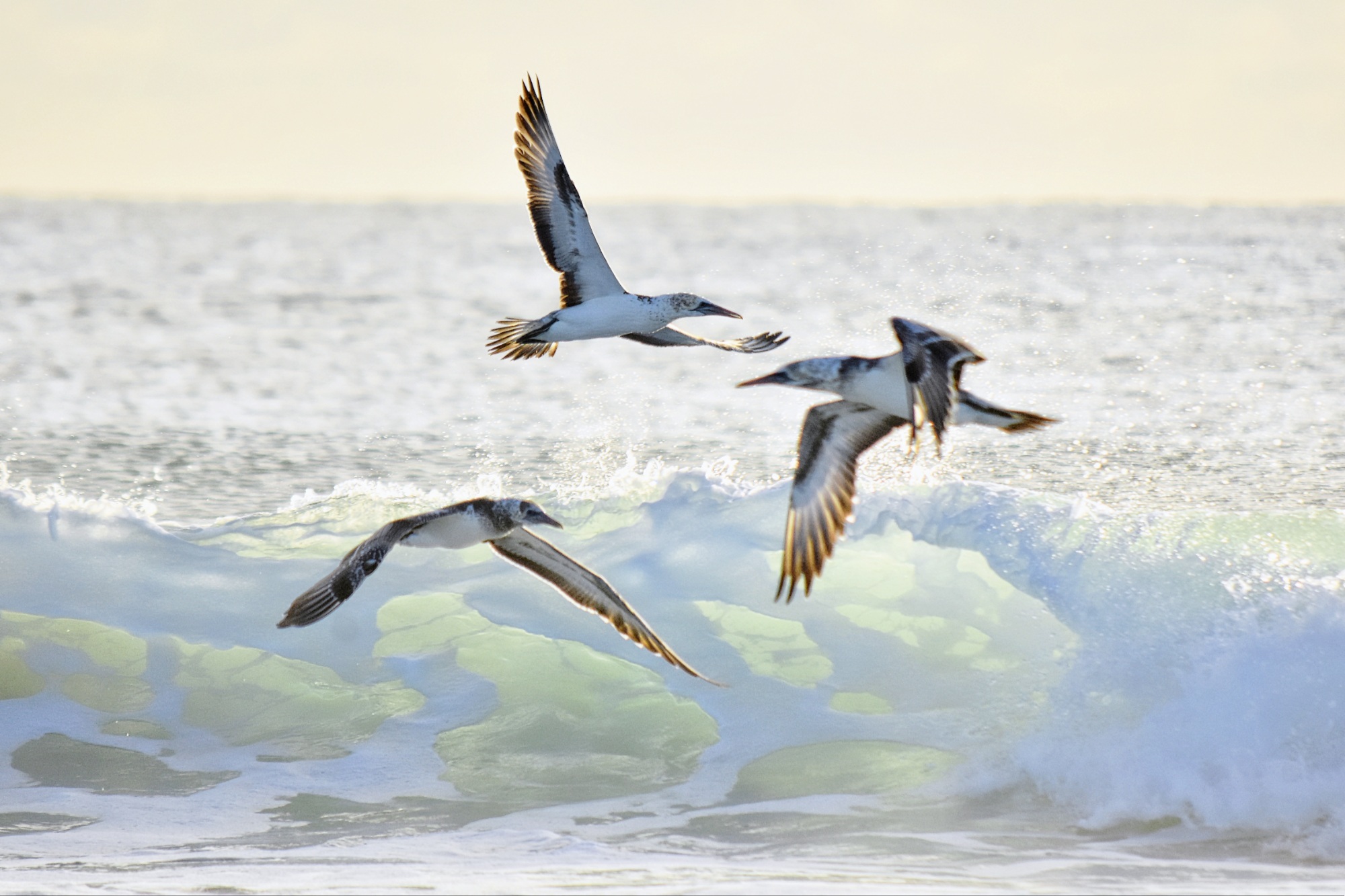